Russia is a country that has undergone a lot of turmoil over the centuries. People have suffered. The authoritarian rule of the Tzars was followed by the pains of revolution and then what is called the totalitarian rule during the Stalin era! All over Moscow you see this tumultuous history depicted.

Kremlin is a fortress built by Italian architects from Renaissance Italy on the invitation of the Grand Prince Ivan III. For a brief two years in 1600 Kremlin was held by the Polish. Prince Dmitry Pozaharsky and Kuzua Minin liberated the Kremlin with a voluntary army. The only Statue on Red Square is of Pozaharsky and Minin. 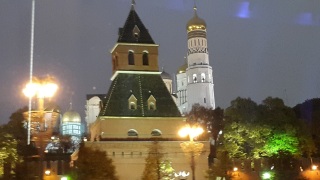 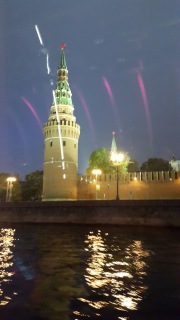 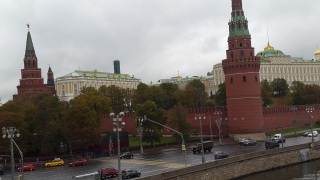 The two striking pieces of artifacts in the Kremlin are the huge
cannon that was never fired and the Tzar Bell that never tolled!
Ivan  the Great Bell Tower is an impressive tall structure but it was
unclear whether it was intended to hold the Tzar Bell, which currently rests on the ground!
The Senate is the seat of power of the present government. Our guide and the Kremlin walking tour was followed by a “shadow”, a lady who silently walked behind us! Our guide Darcia joked “don’t worry she is not KGB”. Putin’s entry and exit into Kremlin was a secret and even his residence is not clearly declared, apparently had
many.

Most impressive were the Cathedrals in the Kremlin. The Assumption Cathedral, the oldest is where the Tzars and later Emperors were crowned, Patriarchs and Bishops were consecrated. The Holy Alliance between the church and the state power clearly showed. Ivan the Terrible corronated himself at the age of 16 in this Cathedral.
The Russian Orthodox Church contained many icons and these
were arranged in tiers on the walls in the Cathedrals with high roofs. The lowest tier is for the local icons including the one the church is dedicated to. The tier above had icons of Mother Mary. The next above had icons of Jesus Christ. The topmost tier was dedicated to the Holy Trinity.

There are no seating arrangements in the cathedral. The Orthodox Church believes that one  should stand in respect and offer prayers.
Strangely the Orthodox Syrian Church in India follows a similar a
approach with no pews and offer prayers standing. No alters were visible inside the Cathedrals. There was a highly ornate door instead,  with the  alter on the other side. The common people, the sinners, are not allowed to enter the alter. Only the priest, the representative of God can enter the door on to the alter. During the service the door is opened and we managed to see inside after a service on a Sunday! The priest was dressed in robes very similar
to the Orthodox Syrian ‘kaapa’ and the  door was similar to the curtain which closed the view to the alter.
The Annunciation Cathedral was the private church of the Tzar. It connects directly to the Kremlin Palace. As the Assumption Cathedral, the Annunciation Cathedral was  also painted with frescos with large number of icons following a similar order. Folklore had it that the Russian Tzars were allowed three wives.
Ivan the terrible had six wives, mainly because of disease and early death of wives and children. After his fourth wedding he was not allowed to enter the Cathedral from the main entrance. He built a separate entry into the Cathedral with a separate flight of stone stairs,  which was visible. This is not noted in Wikipedia!! Unfortunately photography is not permitted in the Cathedrals which  painted a really grandiose picture.

The Red Square displayed power and force and was used as a place to address the army. 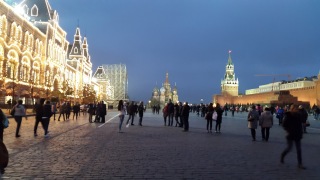 Just outside the Kremlin, along its walls is the Lenin Mausoleum. We were amazed to see the body of Lenin laid out in ful regalia! We thought it was a replica and the body would be buried deep under the Mausoleum. Imagine our amazement when our guide Marina told us that was the real embalmed body of Lenin on display since 1924 when he died. That was a heart warming experience. So far we had only seen the grave of Karl Marx in North London with a massive stone sculpture of his face. But to actually see the body of Lenin was a dream.

In some period apparently Stalin was laid next to Lenin in the Mausoleum. But later when his status fell his body was removed and buried behind the Mausoleum where a small statue of his bust stands in a line with other leaders!

The St. Basil Cathedral is the other iconic and colourful structure in the Red Square. Basil was apparently a strong critic of Ivan the terrible. The church was built by Ivan the terrible to mark the capture of Kazan and Astrakhan while he expanded the empire. Originally known as Trinity church it was later named after the Basil 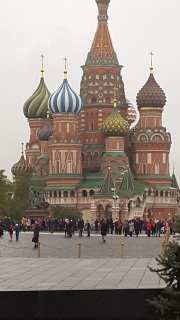 2 thoughts on “State and Religion: Kremlin and the Orthodox Russian Church, Moscow I”