Jannat: Heaven on Earth is how Kashmir is known as. The world’s most beautiful garden on the top of the World. HIndi Cinema shot on the Dal Lake in the 1960s an 1970s, Kashmir ki Kali. Heroine Sharmila Tagore the young beautiful Kashmiri woman, we recall from our childhood! So many decades spent in India and I had never visited the state. Missed it in my childhood and youth and then began the black decade for the State. “Kissiki nazar lag gayi!” Missed the opportunity a decade ago when my partner visited the state on a mission. Another decade passes and finally we made it to Kashmir October before last. We hope to make it again this year! But some records of our last visit.

It was still Jannat a year ago, but the Black years had taken its toll, Dal Lake, the gardens, the people, livelihoods, the beauty, the hills, the horses, greenery and even the snow! Sorry, don’t blame the snow on the Black years! It was off-season when we visited. The summer crowds were gone, the snow had melted and the state was waiting for the Bengali tourist during Puja and the foreigners in December for skating, skiing in the snow and freeze. So we had a wonderful, peaceful, enjoyable time! We did all the three hot tourist spots, Gulmarg, Sonamarg and Pehelgam! Each had its own unique scenic and rugged beauty. We voted for Sonamarg as the best and most enjoyable experience!

At Sonamarg, our horseman, Manzoor, looked like an older version of film star Hrritik Roshan, and was most enthusiastic and loved photography!  Sonamarg is at the beginning of the Siachen Glazier, way up and above where we could ever hope to reach. We were promised snow in a cave and Manzoor was hell bent on taking us there. If it was not for his enthusiasm and grit we would never have made it over the mountain passes on a horse and the last trek up a vertically steep hill. The snow we had to see, as though we had not seen any before! It was hard work for us to climb the rocky steep slope with the fear of slipping down any moment. The top of the hill finally! It had some hard rock of ice and as a smart  boy up there said “Isse zyaada ICE hamare fridge mein hai!” (There is more ice than this in our fridge) I roared with laughter and Manzoor was even more convinced that he would show us the snow!!! So while we posed precariously on the rocky slope, Manzoor scraped, excavated a few large balls of snow for our benefit. So here we are with our prize Snowballs posing for Manzoor’s photography skills! It made my day and the whole trip to Srinagar was worth it! 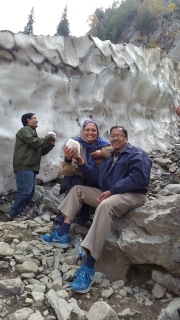 The famous border scene from Salmaan Khan’s blockbuster film Bhajrangi Bhaijaan It was shot in this valley, where a small stream flowed. It was then filled with snow, unlike when we saw it (below), and a barbed wire ‘Border’ with the proverbial no-mans-land in between was created on that wide bed of snow. In the film crowds flowed down from the hills and our very own Manzoor and the local people formed these crowds. Manzoor was happy to explain the making of the film, the arrival of Salmaan Khan and the equipment, part of the way on jeeps and then on horseback, like we did! Lots of employment was generated for the local people and yes, they were paid for it!! 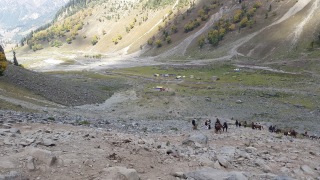 Gulmarg had a cable car ‘gondola’, but not very picturesque! Another set of horses, Raja and Badal, took us up the steep mountains to a small stream, a very rugged beauty. The horseman here produced some leaves that he claimed was ‘papyrus’ writing paper of ancient times! Pehelgam’s Ane Valley was a beauty with rolling hills, valleys and sheep.  In Chandananwadi, I was exhausted. My partner decided to be Hanumaanji and climb the mountains and came back exhilarated with the bark of a tree that he claimed was chandan (Sandalwood) 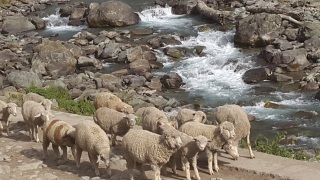 I had never seen an apple orchard. One of our tours took us to the apple orchards. What a treat, we bought apples and apple jam! 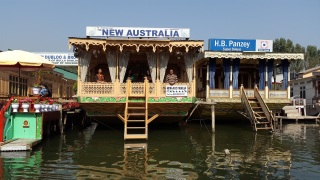 While the houseboats were owned by them, the space on the Dal Lake that it occupied was rented! The use or ownership rights of these ‘plots’ on the lake and the land behind the boats, where vegetable cultivation took place, were owned by ‘folks from long time ago’. A recent article in EPW (Maurya, April 15, 2017) claims from readings of historical records that the Mughal emperors toured and built the Mughal gardens, renamed cities and developed the region mainly for pleasure. “In Akbar’s reign, the imperial cavalcades toured the region, surveying the sights. In Jahangir’s reign, construction was carried out at a number of these sites. For instance, Jehangir parceled out the lands on the banks of the Dal Lake amongst members of the royal family and nobility.”
Recently there has been talk and fear that the government would take away these rights and all these houseboats which occupied prime location on front of the lake would be pushed back to less remunerative spaces! To me it seemed like the perpetual problem faced by the street vendors of all our cities.

Life on the Dal Lake, a whole city lived there! The children went to school, the elders went for a stroll and exercised, the workers went to work in the morning, all on shikaras. There was street vending or ‘lake vending’ going on in the morning when people in shikaras were trying to sell us flowers, vegetables, jewelry, clothes, shawls! And in the night, the Lake came alive, entire ‘streets’ of shopping lighted up called the Meena Bazaar! Here are a few photos of life on the Dal Lake! 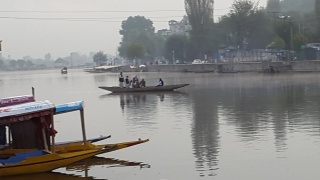