Ladakh is a ‘Cold Desert’, but the snow-capped high mountains ensure that there is a stream of water trickling down during part of the year. These form little rivulets, streams, rivers and lakes. We witnessed a confluence of streams, rivers and lakes in our week in Ladakh. As expressed in my blog post on “Soothing water front experience”, I love large bodies of water and ‘blue space’, water or sky! Not all water bodies in Ladakh were blue due to the continuous erosion of the soil and rock from the surrounding mountains. But still their effect was captivating.


Our first view of the meandering River Indus was from the top of the Spituk Gompa, a Ge-lug-pa Monastry built by King Gras-Pa-Bumlde in the 14th Century. On one side of the hill was the view of the Leh airport and on the other was the meandering River Indus with a lush green river bed. The Yulak and Yarfa (poplar) trees were planted in clusters adding to the greenery. 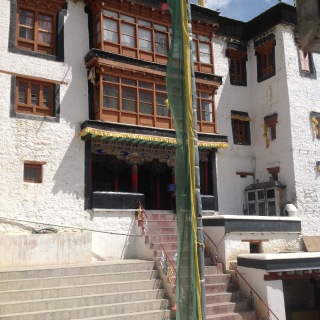 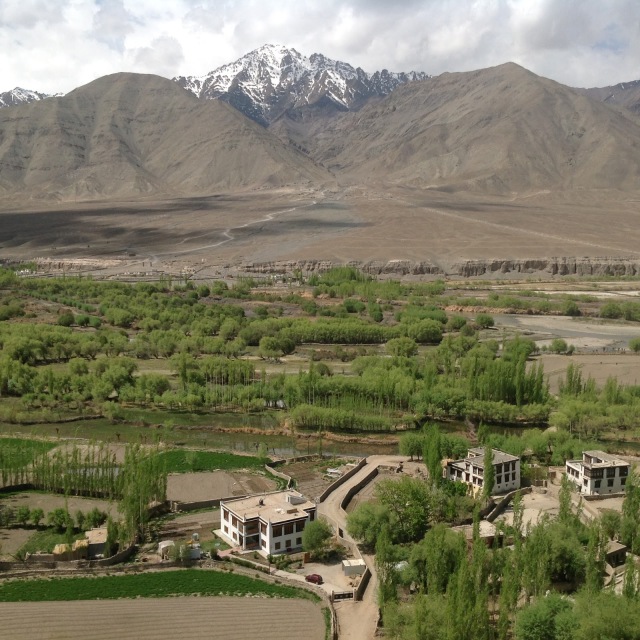 Away from Leh as we drove up the mountains, close to Nimmoo Village, we got a magnificent view of the confluence of the Zanskar river and River Indus. 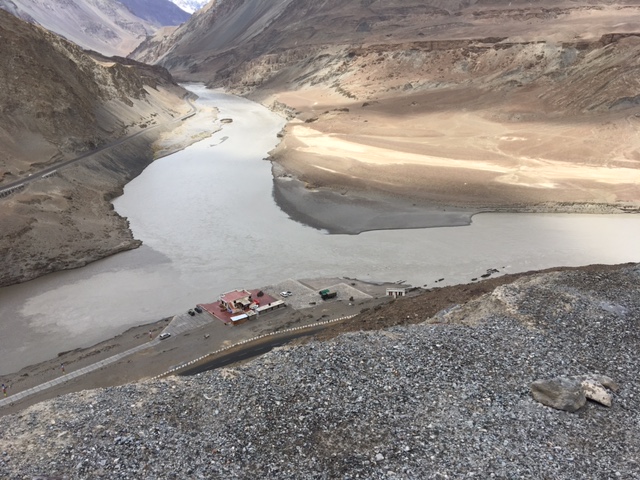 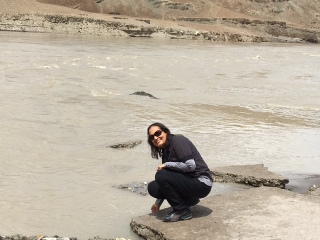 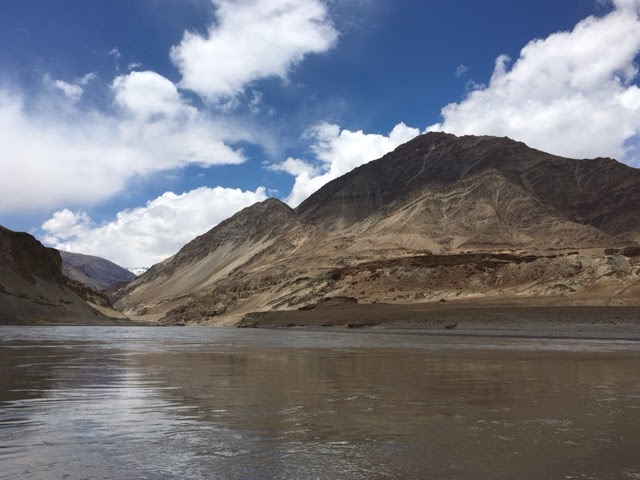 The River Indus came down from the North, the Zanskar river came from the South West and the two came together in wedlock, a Sangam, and flowed together rapidly towards the South East forming part of the great Indus Valley. It is said that at certain seasons of the year, the rivers have different colours and flow and wildness. But on that day both rivers were more or less muddy. The flow of the River Indus was more rapid and wild, while the Zanslkar flowed in Jhankar (Melody). The confluence of the two took the form of the wild and fast flowing Indus.
We spent some time along the bank of the confluence of rivers. You could see the snow-capped mountains above from where the River Indus seemed to emerge. The hills and the immediate vicinity were brown and bare, but as we sat there the sun fell on parts of the hills and there was a remarkable play of light and shadow over the mountains. The blueness of the sky above these hills was also calming and serene. As we sat drinking tea at the exact spot of the confluence we noted a strange effect on the river. The Indus came down fast and the Zanskar joined it, together they took off in a different direction rather wildly! But the part of the river in between the two and closer to the shore where we sat seemed confused and appeared to be flowing in the opposite direction, or there was a sort of whirling effect in the water where both the rivers met with great force! Perhaps a part of Zanskar was resisting its loss of identity in merging with River Indus, clearly the stronger force!!
Zanskar: Resisting its loss of Identity?
Pangong Tso/Lake, Tibetan for” High grassland lake” at a height of 14270 ft. has a pristine beauty. It was largely ignored till the last two years when tourists began to throng the Lake. It was made famous by the Bollywood film “3 Idiots” starring Aamir Khan, supposedly based on Chetan Bhagat’s novel ‘Five Point Something”. The last scene of the film was shot at a particular point on the lake and made as though the experimental school by Wang Chuk was located by the Lake. The school Druk White Lotus School is in fact closer to Leh in a village called Shey.
We reached the spot and it was incredibly beautiful. It was also freezing in May, as a cold wind was blowing from the West. We ran back to the car to get our winter gear, sweater, jacket, muffler, gloves!! The prime attraction on the beach along the Lake was the yellow scooter supposedly driven by Kareena Kapoor, the heroine, in the film! There was a big poster of the scene mounted next to the yellow scooter. An entrepreneur was charging Rs. 50 to sit on the scooter and be photographed! When I tried to take a photo of the scooter he stopped me, but of course we got a shot from a distance! 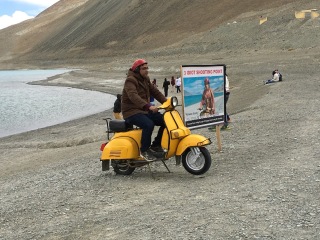 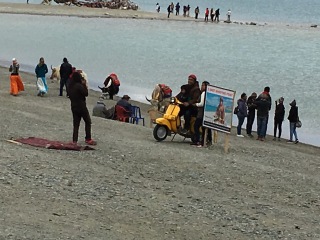 There was also Yak riding on offer on very well adorned Yak. However, that industry was not doing well, due to the freezing breeze and competition from the “3 Idiots” yellow scooter. 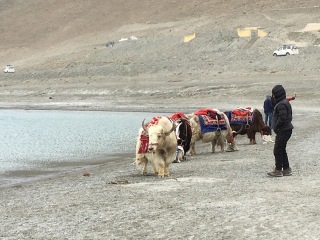 The next prime spot was the peninsular land jutting into the Lake on which the last scene of the film was shot. In the freezing icy wind we got there. It was beautiful, the colour of the water and the gentle lapping of the waves on the shore. Some of the mountains surrounding the Lake were snow-capped and some were various shades of brown. The mandatory photo-shoot of course, but the icy winds did not allow us to stand there for long. We were estimating the temperature to be – 2 deg C, with the wind chill. But our driver did not think so! 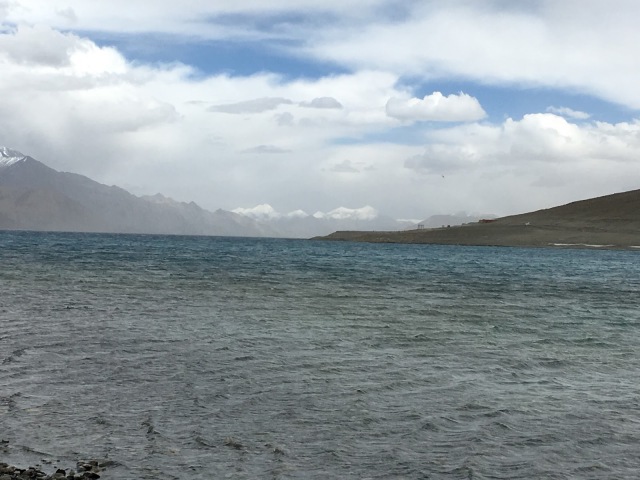 We proceeded to the Royal Camp for the over-night stay and discovered that these were tents! With the icy winds still blowing I simply refused to stay the night in a tent! Royal Camp was able to arrange a swap with Woodland Cottages nearby. At least these were wooden huts and the wind did not blow through it! We settled for Cottage 302! And of course we froze for a few hours at night! 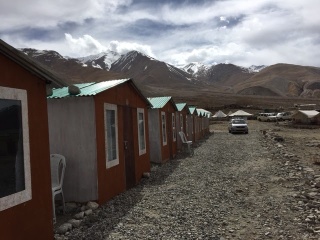 It was only 4.00 p.m. and the wind had dropped. We were very close to the lake near the village and decided to walk down to it. The scenery with the lake, mountains, waves, rocks on the shore was magnificent. The view was panoramic. We found a comfortable rock and sat down on it to enjoy the calm, serene, atmosphere of the Pangong Lake!

The water was clear and you could see the large rocks and pebbles at the bottom. The waves lapped against the shore. The water was deep blue at the extreme end near the mountains, lighter shades of blue in the middle and nearly sea-green close to the shore. I was mesmerized as usual by the expanse of water and lulled by the sound of the little waves breaking on the shore. I needed to capture it for posterity and so here is a short video. I was adventurous enough to touch the cold water and run when the waves touched my toe. A little, probably Scandinavian, kid was wading in the water in shorts with his mother encouraging him to do so! My partner tried his favourite trick. He picked up some flat stones and tried to throw it flat across the lake. First attempt one bounce, second attempt two bounces, and third attempt two bounces again. Not Bad! Bravo!

The changing colour of the Lake and of the Changchenmo Range of mountains to the North as the sun fell on different parts was equally mesmerizing! I remembered our Scientist friend who urged that children should be taken to the ocean and mountains to get the ‘sense of infinity’. The snow covered mountains on the Eastern side of the Lake are in China, the larger part of the Lake being with them. This apparently is the reason why no boating or any sports activity is allowed on the Lake. 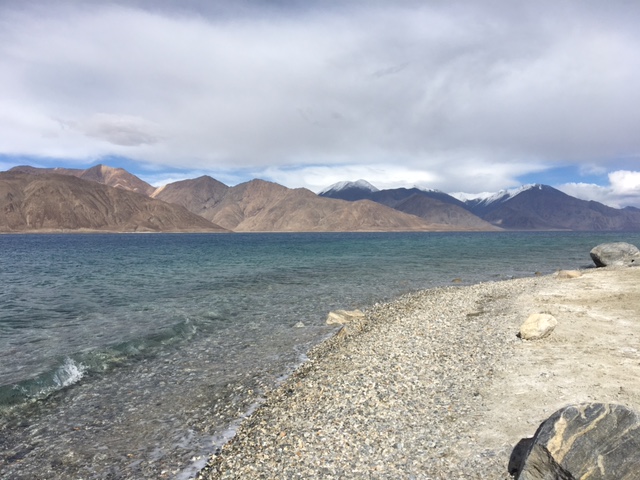 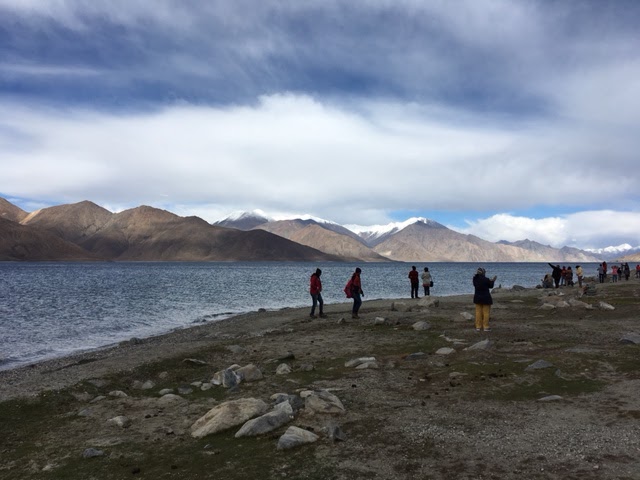 We walked further down to the Eastern part of the Lake watching the antics of the folks as we went along. The Lake also inspired creativity. The most common sport was to create ‘Pittu’ or ‘Seven Tiles’, placing rocks one on top of another to create a tower, balancing as many as possible. There were many small and large ones. The one that took the cake was four feet high and it was signed “With love forever, Allen and Rica from Taiwan”. 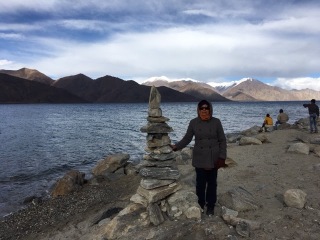 We sat down by the lake and noted another ‘Pittu’ with, what my partner called ‘some mumbo jumbo’ done on it. There were some weird drawings on a paper and some orange cloth beneath the ‘Pittu”. We later learnt that these ‘Pittus’ are wish stones and aslo prayers for the departed souls. They were everywhere, particularly at the entrances to Monasteries. We sat down to enjoy the serenity of the Lake till we began to freeze again and started our walk back to Camp David!! 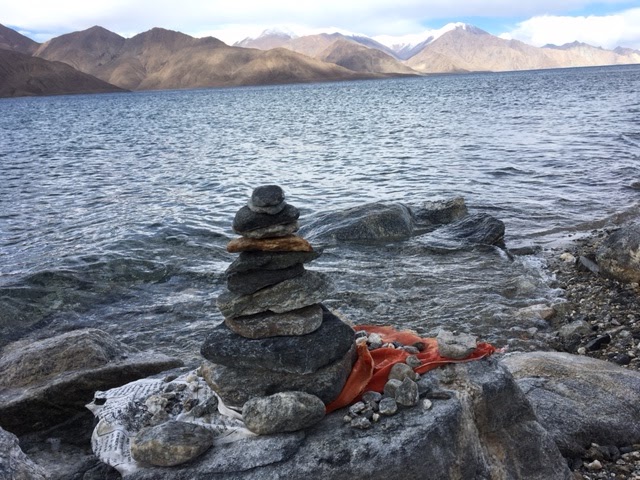 5 thoughts on “Ladakh: A Confluence of Rivers and Lakes”