Ireland is a land of rugged natural beauty. Galway is located in the West of Ireland on the Bay of Galway. The land to the north west of Galway called the Connemara region and the land to the South of Galway called the Burren have very different geographic structure and is picturesque in it’s own way.
The Burren is formed by thick layers of sedimentary rock consisting mainly of limestone (karst). It  is said to have been formed by years of sedimentation of fossils of corals and various form of shells and sealife. This formation of exposed limestone terrain with jagged cliffs is seen all along the West coast south of Galway. Our Tour guide told us that it looked like the surface of the moon and that Neil Armstrong never went to the Moon. He was photographed here!! So I landed on the moon too!!

Glaciers are said to have covered and expanded in this area since the Iceage and later. In the Iceage all of Ireland, Britain and Europe were one mass of land. Ireland and Britain shifted apart later and Ireland continues to move North!! Preexisting weakness lead to deep fissures in rocks. According to our guide in this area and all of Ireland many rivers run under the ground. The rock karstification facilitates drainage. The result is the formation of numerous caves through which the water flows. One of the famous and preserved on is called the Aillwee Caves. We entered these caves that contain a river, waterfalls, stalactites (drippings from above) and stalagmites (drip formations on the floor).

There were many Anglo-Saxon raids into this region and the Lords/Chieftains also continuously fought with each other. So there are the remnants of many small castes and Round Fortified Tower Houses. The people lived on the upper floors and there was nothing below. This was so that they had a view of the surrounding areas to watch out for approaching enemies!. The few remaining ones are the Dunguaire Castle and Newtown Castle. About 20 odd Tower houses are seen around this region.

The ordinary houses originally had thatched roofs, made from sea weed. Apparently it provided very good insulation and lasted 25 years inland and about 20 years on the coast.
Very few such houses remain and very few professional ‘thatchers’ exist today.

Among the rugged cliffs of The Burren the most famous and must see in Ireland is the Cliff of Moher. It is absolutely spectacular and can only be seen and felt. No photograph, and definitely not from an iPhone, can capture its breath taking beauty and wildness. I would rank it as high as the Niagara, and better for its wild feel. We were lucky to have a bright sunny day with relatively low speed winds. In spite of that it was very scary to see people go right up to the edge. I can imagine on a very windy rainy day it could be extremely dangerous. 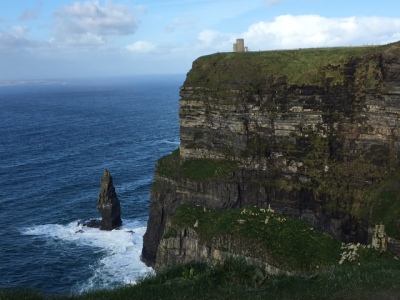 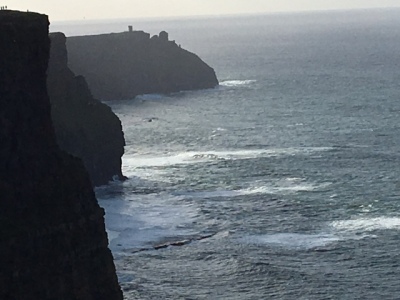 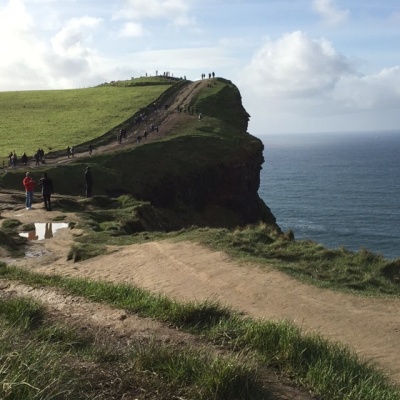 The walk up to the cliff reminded me of the Great Wall of China. Long and winding, quite wet, slippery and dangerous it seemrd to me in places. There are at least five such cliffs in a row. It would take a lot of effort to walk the entire Cliff Walk.

A holiday in Ireland is highly recommended if one enjoys rugged and natural beauty!

One thought on “Ireland: The rugged landscape of the Burren”