On the last day of 2017 I was very excited to see that the Great Golden Circus had pitched its tent relatively close to our house! Till the river front project took root the circus always played on the bank of the Sabarmati river. As a child in Calcutta my father took us to every Circus that pitched its tent on the banks of the Hoogly! The circus was a large affair in those days with lots of animals. The lions in the cage with the Ring Master cracking his whip at them to stand up on stools of various heights was a standard scene. We never tired of seeing that. That silly Hippopotamus! All he could do was open his awfully big mouth to get a piece of bread from his Master who walked him around the ring! There were monkey shows, lots of horses and elephants. As children we loved it!

One year the Great Russian Circus made its way to Calcutta! That was a grand show. I somehow remember it being staged inside very large auditorium or a stadium. There were few animals, though I think, there was a large set of horses and the artists did numerous tricks riding on them! The trapeze show and trapeze artists were the stars! How they whirled, twisted and turned on the roof, we were in awe! The Plastic Girls! Later I understood that Gymnastics was a national sport, taught from childhood in schools it seemed in Russia! 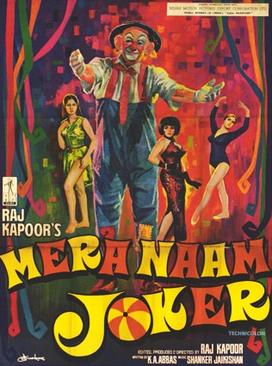 The Indian circus was made immortal on screen by actor-producer Raj Kapoor‘s Bollywood film, ‘Mera Naam Joker’. He weaves the story around a circus and paraphrases it with the circle of life. “शो  तीन घंटे का ! पहला घंटा बचपन का, दूसरा जवानी और तीसरा बुढ़ापा!” (A show for three hours, each hour depicting childhood, youth and old age). ” ऐ भाई ज़रा देख के चलो ! ….. दुनिया एक सर्कस है। तरह तरह नाचके दिखाना यहाँ पड़ता  है, हीरो से जोकर बन जाना पड़ता है! ऐ भाई” (Hey brother, the world is a circus, we dance to different tunes, even a hero has to turn into a joker!) How true was this observation, though the film did not run to box offices as anticipated.

Later in life as a student in Trivandrum, my partner and I  took to taking kids of our Professor and later our friends in Ahmedabad to the circus and zoo! As I grew up with the experience, I felt it was an absolute necessity for children to see animals in the zoo and perform in the Circus! It felt so real!

My partner was not as equally enthused to watch a circus show in the afternoon of December 31! I thought of a trick! The children in Ahmedabad who we took to the circus, along with our daughter, were in town with their children! Technically not our grand children, but socially so! I suggested we should take these little kids to the circus! He pepped up, and I had my way! So off to the circus we went with our friend and his grand child.  The little fellow was really excited! They lived in Hong Kong and did not see live animals on the streets as our kids did in India! As we entered the circus tent we saw two elephants being fed on one side and some horses on the other. He was super excited. At first he was a little intimidated with the dimension of the tent and the  open ring. We got the best seats in the front row.

First we had the trapeze artists swinging from swing to swing on the top of the tent. Clap! Swoosh! she went, turning in the air before the guy on the swing at the other end caught her mid-air! We held our breath! He released her again and the swing came in from the other side. Wheeee, she turned and caught the swing as it reached her precisely timed! The men trapeze artists did a few more very intricate twists and turns in the air! The joker was there too! The joker swung and the guy on the other end caught hold of his pajamas which inevitably came off!! “Ha Ha Ha” the children roar. Swing again and the joker misses, down he came on to the safety net below! Hee hee hee! The jokers are expert artists really and jack of all trades as well. The misses and glitches are only to elicit a laugh!
Next a lady walks in with about ten dogs in tow! She makes them jump through loops, walk on two legs and roll a drum with one dog inside and six pushing the drum!!

The lady with the colourful parakeets. I was amazed that they did her bidding and did not fly away or around the tent! Our little grandchild was getting excited! “Now the lions will come,” he said. I got the point of the excitement. So I said softly “the lions won’t come, only horses and elephants will come!!” Perhaps he was disappointed but did not show it! With a greater consciousness of animal rights there were now very few animals in the circus. And of course economics works too, with rising costs maintaining a circus, particularly animals, is not a very profitable business. Fortunately a set of young girls came in riding the horses.  They rode front to back, back to front, jumped off and on to the speeding horses!
Most of these shows were standard and there was nothing really new in them. I remember that as children we observed a lot of girls from Kerala in the show. Now there were none. In fact there was a big contingent of girls from the North East states and Assam. I guess this is the changing geography of prosperity and poverty in the country! We met another faculty colleague of mine at the circus with her son! Next day at the University we exchanged notes. She was very sad and said all she saw at the circus was the exploitation of these girls clad in skimpy clothes and  performing on the trapeze, twisting and turning in various gymnastic postures! True, the girls were earning a livelihood and behind these glitzy clothes and limelights were probably stories of entire households dependent on them.

The new act was by a set of African men. I later discovered they were Tanzanians on three year contracts at the circus. They also left their country to earn a livelihood. The Tanzanian men performed power gymnastics and some really exciting cycling tricks. They brought in a newness to the circus.

The one really good act by the jokers, who were generally pretty nondescript, was a cycling act. They came in with a cycle with a rather long bar and more than one seat and jokers riding it. Slowly this cycle took various shapes, changing from a cycle with the pedal up, from two to one wheel and so on. The expert jokers rode in style and elicited a lot of laughs!

“Mauth Ka Kuan” (मौत का कुआं ) was another old exciting act where men rode motorcycles inside a metal globe. This time it was frightening to see three motorcyclists riding inside the globe. What precise timing!

The elephants came in to play cricket, one was the India team and the other was Pakistan! Pakistan batted first and the Indian elephant bowled to him. Pakistan hit a few fours, with cheers from the audience. Finally he got out with a roar from the audience. India came in to bat and he took off. Each ball was lifted for a six, the audience and our little grandson roared with appreciation. And sure enough India won, the most cheered team and game of the circus! Playing to the gallery! Our grandson, a stickler for the
accuracy, was a bit upset that they were playing cricket with the wrong ball, not a cricket ball! Grandfather spent some time explaining to him how the elephant or the spectators could get hurt if they played with a hard cricket ball. All in all we and the little fellow had a great time at the circus,

A few weeks later I participated in an academic circus! I was reminded of the song in Mera Naam Joker. As an Economist I decided to send an academic paper to a peer reviewed Management journal. Not sure for what reason it got shortlisted. The journal invited 15 paper writers to a Paper Discussion Workshop at Bangalore. It was an interesting experience, watching the workings of an Old Boys Club of Editors of the special issue, American professors and their NRI versions, and their apparently known  set of paper writers. They were all set to appreciate and aid each other to get their excellent and not so excellent papers into the Special issue of the journal. And some of us were the outsiders, jokers of the pack maybe! I have heard of academic arrogance and the mafia in academia, but I witnessed it for the first time! And you guessed right! The Jokers never made it to the pack!!
And so we said goodbye to 2017 and welcomed 2018! A little late, but good wishes to all friends and readers of this blog for an exciting Circus of 2018!