On one of our periodic visits to the local bookstore Crossword I picked up a novel “The Signature of All Things” by Elizabeth Gilbert. It was from one of my favourite genre, with powerful woman characters, detailed and well researched themes. This time the theme of the story turned out to be botany! I never knew that the author was famous and the theme was not so unique. Strangely as I traveled the world (!!) while reading this book a friend in London suggested we visit the Kew Gardens. Unfortunately the visit never materialized (will during another visit), but I discovered that the Royal Botanical Gardens in the novel was later named the Kew Gardens. As luck would have it, I crossed to the continent of America and a friend in Washington DC took us to the US National Arboretum. Later, we went on a fascinating tour of the Phipps Conservatory and Botanical Gardens in Pittsburgh with a cousin. Amazing coincidence that has led to my venturing out to be an amateur Botanist in this post!!
The story of “The Signature of All things”, revolved around a home-grown botanist Alma Whittaker in the 19th century. Her father was Henry Whittaker, the son of a local gardener in the Royal Botanical Gardens, London. The father was very honest and loyal, hence remained a poor gardener all his life and raised his family in poverty and squalor. At least that was the interpretation of Henry Whittaker. Henry was neither educated well or trained in anything, but being around his father, and often thrashed for it, he acquired a trade! He learnt the uniqueness of plant varieties, to graft plants, understood that they were valuable and there was money to be made from it. The Royal Gardens was then under the botanist Joseph Banks, who send explorations around the world to collect botanical specimens for the Royal Gardens.
Henry Whittaker develops a good trade in stolen plants from the gardens, making contact with botanists collectors. He manages to catch the attention of Banks when he is handed over to him by his upright father who figures out his deception. Banks, a businessman himself sees the acumen in the boy and instead of punishing him decides to send him on one of the botanical explorations. Henry makes good use of these opportunities and finally immigrates to the new nation of America, buys up land and settles in Philadelphia. He and his Dutch wife raise their only born daughter Alma Whittaker with the true spirit of a researcher. The life of Alma Whittaker, her discoveries of a most innocuous plant the moss, and her travels to strange lands to nearly discover her own variation of Darwin’s theory of natural selection is an exciting journey you take with her.
The description of the gardens, the botanical species, grafting and the woman scientist Alma Whittaker were so real, that I felt it must be modeled on some existing real life botanist. I googled for Alma Whittaker, but found she was a fictional character. However, I found that Henry Whittaker, father of Alma, may have been modeled on a real life botanist Joseph Whittaker who also traveled the world, including Australia, to bring large number of plants to the Kew Gardens in England. Towards the end of the novel Gilbert brings in another real life botanist in close contact with Alma, Alfred Russel Wallace, who is said to have figured out the idea of natural selection and was in communication with Charles Darwin on it.
Alma’s husband Ambrose believed in the hand of God in every little creation in nature. A signature of all things! It reminded me of the hymn that we are familiar with since childhood written by Cecil Frances Alexander.
All things bright and beautiful
All creations great and small
All things wise and wonderful
The Lord God made them all.

In my recent visit to the conservatories in US I was indeed reminded of this poem. The US National Arboretum in Washington DC was a treat. It contained various sections with a variety of plants. The section on Bonsai was just fascinating. Bonsai is an ancient Chinese horticultural tradition which literally means “Planted in a container”. It was the Chinese art of growing dwarf variety of plants and trees in a pot, so that even fruits that grow on large trees can be grown in your drawing room. This art was later cultivated in Japan under the Zen Bhuddhism. The method of creating the dwarf variety is called ‘training’ and is done through restricting and guiding growth of the tree with metal wires. I am sure in ancient times in China they used more natural material for ‘training’! The Arboretum in Washington DC had bonsai that were in training from 1625, gift from Japan, and many more such gifts from China as well. The Phipps Conservatory in Pittsburgh had a few Bonsai as well, though not of such vintage as in the Arboretum. 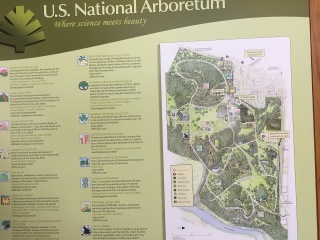 As we left the Arboretum we saw what to our eyes were equally exotic, a yellow flower on a cactus, ‘Beaver Creek’ Prickly Pear it was named. I was thrilled to bits as just a month ago, a little cactus in our front garden sprouted a yellow flower, We had never seen this before. As my husband came into the house he noted this. I immediately got into action and took a number of shots with my iPhone. So here is the comparison. And what luck that I did that. We had a lot of guests come home that evening, but guess what? The homely Prickly Pear is obviously shy and decided to fade out by evening! A one day wonder, still something to boast about!
,

The Phipps Conservatory and Biological Gardens in Pittsburgh was smaller and had slightly more traditional flowers, ferns and trees. It had a large variety of orchids. Though it did not seem to be the season for orchids, there were many exotic (to my poor desert eyes) varieties. Here is a sample: 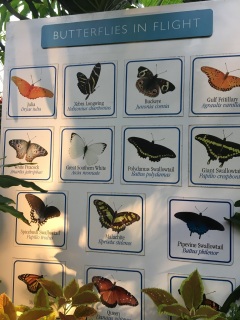 The Phipps Conservatory had this amazing butterfly garden. A greenhouse, like a natural garden, had a variety of butterflies flitting around. A very exciting experience in an artificially created garden. The kids who were there in numbers with their parents or more often, grand-parents, were thrilled with the experience. Here is short video of my amateur effort to capture butterflies in flight and you can hear how excited we are too! 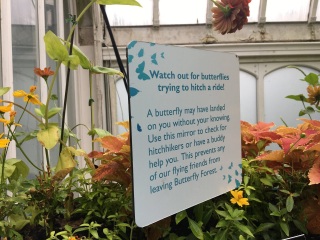 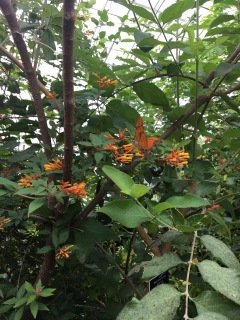 As you leave the Phipps garden they politely ask you not to take any of the butterflies with you. A warning note says the butterflies may hitch a ride with you! Large mirrors are placed for you to look, not at your beautiful face, but at your back to check for hitchhikers!
Like our fictional Botanist Alma, it was wonderful to see the dedication of the staff in these gardens. There were many volunteers too. My friend and his mother had volunteered in the Arboretum and he showed me the patch he planted and the trees his mother trimmed! He called and convinced his mother in India that the plants she trimmed looked just the same a year later, all her work!!! Or was it the Signature? Now after the tour of all things bright and beautiful it does feel like a case of the divine Signature! Only the gardens were man made!

3 thoughts on “All Things Bright and Beautiful”