The ride to north of Israel to Nazareth, Sea of Galilee and Jordan River was full of sites referred to in the Old and New Testament of the Bible. Our tour guide from the Tourist Israel company was Dan Porguse who regaled us with stories of the area. Both sides of the road was dotted with bushes, the kind from which it is said Christ’s Crown of Thorns was made. The plant is called Ziziphus spina-christi, and evergreen tree or bush native to north and tropical Africa, south and west of Asia. It had thorns and looked a lot like the local ‘ganda bawal’, prosopis juliflora, of Gujarat, India.

We arrived at the town of Nazareth. Nazareth is an Arab town with about 70 percent Muslims and 30 percent Christian population. Nazareth is the town where Mary and Joseph, father and mother of Jesus lived. Nazareth and the area around it was where Jesus spent a large part of his life. There are many explanation for the name Nazareth. In Arabic Nazareth is an-Nasira and Jesus is called an-Nasiri reflecting the Arab tradition of linking the name to the place of origin. This reminded me of the Malayalee Christians being referred to as Nasrani. Apparently Nasrani also refers to the Christian living in a predominantly Muslim country. Wonder if the Malayalee term ‘Nasrani’ originated from or has a connection to Nazareth!
The two most important Churches in Nazareth are the Church of Annunciation and the Church of St. Joseph. The interesting thing about the churches in this region is that they were built on the site of the ancient churches of the Byzantine era. This was the early Eastern Roman Empire from around 300 AD. Christianity became the official religion under Theodosius I, 379-395 AD, when the capital city was Constantinople (Istanbul).

According to the Catholic tradition the Church of Annunciation was established on the site of the House of Virgin Mary. It is here that the Angel Gabriel appeared to her and announced that she would bear the Son of God, an event known as the annunciation. The Greek Orthodox tradition, however, does not agree with this location of the site as they believe the event of annunciation occurred near a spring where the Virgin Mary was drawing water. In Nazareth the Greek Orthodox depict this site where there is a water source, a spring, a little away from the Church of Annunciation. 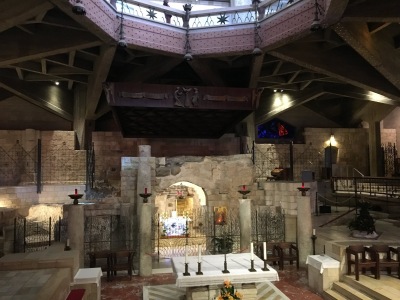 The current church, built in 1969, over the old Byzantine, Crusader era Church, retains the excavated ruins beneath the Church. The first shrine on this site, built in the 4th Century, comprised of an alter in the cave in which Virgin Mary lived. As indicated in my previous blog post on the Holy Land, in ancient times people lived in caves. Built houses and palaces as we know it were only for the rich and Kings. 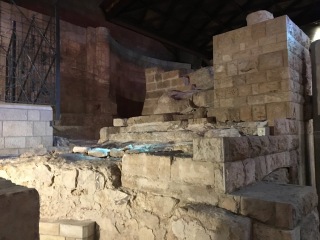 It is said that St. Helena, mother of the Emperor Constantine, was directed by the Emperor to found Churches to commemorate events around the life of Jesus. She is said to have founded the Church of Annunciation in Nazareth, the Church of Nativity in Bethlehem and the Church of Sepulchre in Jerusalem. Our visit to the last two are documented in the earlier blog post.

The new Church above the old ruins has a gallery of mosaics of Virgin Mary from various countries. I was able a photograph only a few of them. 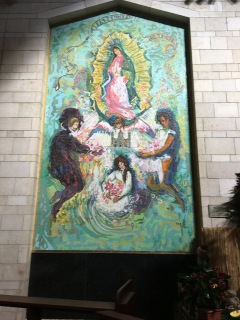 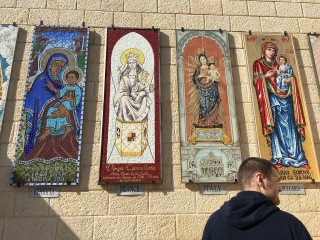 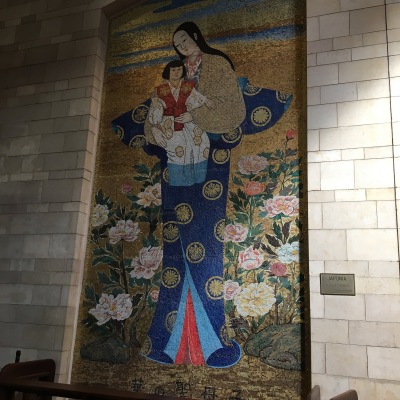 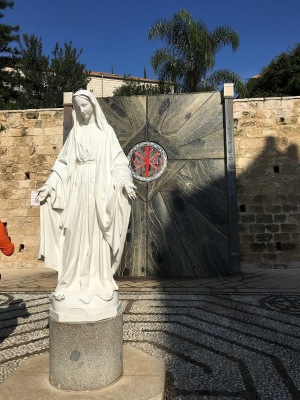 Outside the Church of Annunciation, a Water source has been created to go with the tradition of where the event occurred. There also stands a statue of Virgin Mary crushing a serpent at her feet. This is an odd depiction of St. Mary. It was explained by our guide Dan that this was really a depiction of Jesus crushing evil! Well. this is open to interpretation. According to the book of Genesis 3, this is based on the para “And I will put enmity between you and the woman and between your offspring and hers: he will crush your head and you will strike his heel”. This statue is supposed to depict the crushing of Satan when Jesus, born of Mary, died on the cross as prophesied in the book of Genesis.

The Church of St. Joseph at Nazareth stands close to the Church of Annunciation, with a Monastery between the two structures. The St. Joseph church was built over the remains of older churches. The older Church was said to have been built over the carpenter shop of Joseph, father of Jesus. There are not many churches especially devoted to St. Joseph.

We were in the Lower Galilee region. We passed Mt. Tabor which is considered the Mount of Transfiguration of Jesus. It is on this mount that Jesus is said to have been transformed, become radiant, before apostles Peter, James and John.  We moved on to Tabgha where Jesus is said to have multiplied fives loaves of bread and two fish into enormous quantities to feed a multitude of people gathered there.

There was mosaic on the floor of the Church at Tabgha depicting fish and birds. One mosaic depicted a measure of the water level in a well. What interested me was the figure of a peacock on the mosaic. Our guide said that the peacock was considered an early symbol of Christianity. Well, I will care a little more for the two peacocks that have adopted our lawns at home. 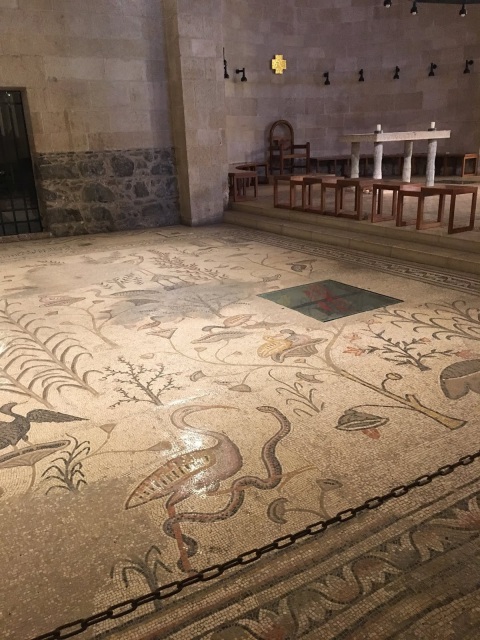 A Church has been build over the House of St. Peter. The ruins of a 5th Century Octogonal Church is visible below the glass floor of the church.

Baptism was a Jewish ritual it was called ‘Tvilah’. It was an act of immersion in naturally sourced water called a ‘Mikva’ to establish ‘ritual purity’. Many of the early Jewish temples had a ‘Mikva’. This ritual was required for conversion to Judaism or before a couple gets married. The difference between baptism in Judaism and Christianity is that in the former it can be repeated. Christians consider baptism an unique act and cannot be repeated. John the Baptist adopted baptism as a central sacrament of his messianic movement. 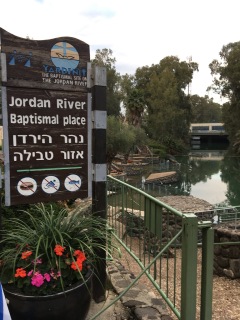 We finally reach the Jordan river which was a small river with green coloured water. In the tourist season pilgrims can undergo baptism with an official priest. One of the tourist in our group was anxious to be baptized in the Jordan river. Unfortunately we arrived a little late and there was no priest there. However our young believer was still keen on being baptized. So he got into the official baptism gown and dipped himself in to the water in the river. I took photographs for him and also offered to bless him. As he came out of the water i placed my hand over his head and blessed him! So dramatic was our tour of Nazareth, Sea of Galilee  and Jordan river, the region where Jesus spent a major part of his life!

The Gospels written by Mathew, Mark and John recount a miracle of Jesus walking on the Sea of Galilee. There can be no scientific explanation for this, but one assumption is that the density of water in the Sea of Galilee, from which the water flows to the Dead Sea is extremely high containing mineral salts. Hence Jesus was able to ‘walk’ on the Sea. One of the Gospels also recounts that Peter also walked on the water, but was afraid and began to sink.

The Dead Sea, located in the Judean desert, is still very dense. I was able to fulfill one of my life’s ambitions and float on the Dead Sea. It was a wonderful experience on the magical sea of the Biblical stories. The black mud of the Dead Sea is considered to have great benefits for the skin. The ‘float’ was however not as much as I had expected. I floated and would have in any water body. Perhaps less effort was required. The density of water has probably declined quite a bit since the Biblical times!

The new crisis in the Dead Sea is of the ‘Sink-holes’. As the salt water recedes and the sea shrinks, sweet water tries to enter and opens large holes. The land collapses into the void. We saw one such Sink-hole that had swallowed up the road. People are advised not to go near the Dead Sea at any point, except the designated areas. We drove all along the Dead Sea coast from the North, Kalia Beach where we floated on the water, to the South till Masada Fort. The sight was beautiful, rugged terrain and beaches along the Dead Sea. Herod the Great is said to have built a palace at three levels on the slope of the Masada Hills facing the Dead Sea. The Dead Sea has currently shrunk and receded away from the foot of the hill!

Training as an Economist has stifled my writing, Hoping that blogging will release my creative writing spirits!! This blog is dedicated to the loving memory of my father C.I.Unni, who would have loved these random outpourings! Credit for the title of the blog goes to my daughter!! I also blog and 'iphone photo shoot' my travels across the world. Do visit at https://unnilogstravel.wordpress.com/ View all posts by Jeemol